Hello everyone, i thought i would write a new post to let you guys know my current situation and how this will affect my development of this game. first of all i finally got a stable job, so i no longer need to worry about being homeless and hungry. the downside to this is i no longer have as much free time as before and it will likely be a free years before i am able to even look at my code again. further more a few months ago it was made clear to me by the mods of lok that i am no longer welcome there (i still don't really understand why), as a result i'm not currently part of any degenerate group. this will likely affect the game's development as i was partly making it in hopes that they would enjoy it. that's all for now, so we'll see how things are in a few years.
Posted by TheWrongHands at 12:17 PM No comments:

alright, so as all none of you reading this probably guessed, things aren't going well for me. i haven't actually worked on the game since the last post and it's looking like i won't be able to work on this game any more going forward no matter what actually happens. perhaps in a few years maybe i'll be able to do so, but i can't right now. i was debating about whether or not i should even bother posting this since no one reads these anyway, but meh.

so i guess this is it, it's been fun, good bye.
Posted by TheWrongHands at 7:18 PM No comments:

Alright, so I have some good news. The reason I was being evicted was kind of stupid and I managed to convince my landlord of that and I'm not being evicted now. Although they have made it clear they still want me gone, so I'm not quite in the clear yet, but at-least it's not happening right now.

Also since I'm already making a post I might as well talk about my game a bit. A few months ago I said I was going to maybe work on the game AI and while that would have been fun, I realized I had nothing in the game for the AI to do. So I changed my mind and have been working on procedural terrain generation instead. So far I'm liking how this is turning out and will hopefully have a build to release soon so that others can see the progress that I have made.

That's pretty much it for now, hopefully things will go better in the future .
Posted by TheWrongHands at 7:02 PM No comments:

welp, i guess this is the end

so for the passed few months i have been working on procedural terrain gen, but i have just been informed that i'm being evicted so that's kind of out the window now. i'm afraid i won't be able to work on this game any more and will likely be homeless soon. i always knew this day would come, but had hoped i'd be able to come up with something before it happened.

Hello, as you have probably guess from the lack of posts, my depression has kind of been getting the better of me. Instead of doing anything productive I've just been whiling away the time playing MMOs. I just don't have the motivation to really do anything productive. I've also kind of been thinking both my future and the future of this project. I'm not quite giving up on it yet, but I think that if it doesn't pan out then there won't be any others. If this project fails it will be my last. I'm tired of trying, I'm tired of putting in a lot of effort only for no one to give a crap, and above all I'm just tired. I think I'm going to go back to bed now.
Posted by TheWrongHands at 4:37 AM No comments:

Alright, so I compiled and ran my game to test out some code and was greeted by this 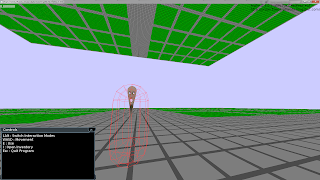 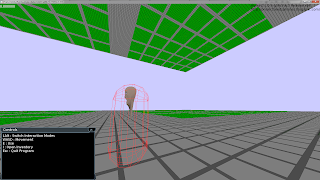 I was sitting there laughing for a good 5 minutes looking at this and thought I'd share it. I don't know at this moment what I did to break things yet as I haven't gone in and looked, but probably I messed up the animation or skeletal system. Although it's interesting that the head would be more or less in the right spot while everything else wouldn't be and even though the eyes currently use the same bone as the rest of the head, they seem to be gone. The mouth also seems to be open in a silent scream even though it too uses the same bone as the rest of the head.
Posted by TheWrongHands at 6:27 PM No comments:

Hello everyone, it has been some time since I posted anything for which I apologize. Pretty much since the time I made my last post I have been wondering what to do about this project of mine and how much to say about what's been going on in my life. Now that it's February of 2018 I have decided to just tell you guys what's going on and what my plans are. So for starters I suffer from crippling depression and I'm not very good with people, which means I spend an inordinate amount of time alone, trying not to think about fellating my 18 gauge shotgun (I was too much of a pussy for a 12). Now originally I was going to make this post in January, but sadly the only friend I had that would speak to me on a semi-regular basis decided New Years Eve was a good time to cut all ties with me and go join a fucking cult (to be clear I have no idea what views the cult has on fucking, so I mean it more as in fuck them rather then to suggest that they are having sex all the time). At this point drowning my problems in the bottom of a bottle is a very tempting prospect, but unfortunately alcoholism is a vice for the rich. Which brings us nicely into the originally reason why I stopped working on this project to begin with. Since graduating collage some time ago, I've not had any luck gaining employment and although I don't know the actual reason, quite likely the depression and lack of social skills played a large part in why interviews never seem to go anywhere. I currently make ends meet by doing various computer related odd jobs such as fixing computers, preforming data recovery, and writing custom software for people. Sadly I don't really get enough of these jobs to get over the poverty line and every month I get to play the 'How am I going to pay for rent' game. I stopped working on this project to really focus on trying to find a solution for my self, but in the end all I've managed to accomplish was spinning my wheels a lot. Now I have thought a number of times about starting a patreon for this game and start e-begging, but I don't really have a product here that I can in good conscience ask money for and back when I made regular posts for an entire year, I only ever got a single comment, which shows there really isn't much interest in this project. Speaking of which lets now look at my plans for this project going forward.

Going forward I intend to come back and start working on this project again, but there are going to be some major changes. First of all as much as I liked posting regular updates on my project, that's going to stop. Instead I'll just be posting progress reports and talking about my game when ever I feel like it. I'm also going to stop caring about an eventual end game and will be working on what ever the hell I feel like. In short I'm going to stop trying to make this a game that others might care about and am just going to be turning it into my little sand box for me to play around in. So as much as I want good fappable artwork and animations in my game, I'm throwing those on the back burner and won't think about them again for some time to come. Instead I'm going to explore the Space Station 13 idea I had awhile ago and will make a little town, fill it with NPCs, and experiment with various AI. I'm also probably going to be bringing things into the first person for awhile so the player isn't forced to stare at the back side of a t-pose.

that's all I have for right now.
Posted by TheWrongHands at 4:00 PM No comments: